Just back from a trip to Moscow and St. Petersburg.  I expected it to be an eye-opener but the reality was, my eyes were opened in a totally unexpected way. Western assumptions about Russia are often still many years behind the times. It is a country trying to play catch up but the major towns, for example, have a very similar aesthetic. The concrete bunker-like buildings still exist but thankfully the Bolsheviks appreciated the value of many of their treasures and kept them safe. Sadly Stalin had different ideas and happily demolished the Cathedral of Christ the Saviour to make way for a gargantuan Palace of the Soviets. Construction was only halted when the Nazis invaded the Soviet Union and a replica Cathedral has now been built on the same site.  Moscow was an unexpected treasure.  I had thought St. Petersburg would be impressive and it really is but Moscow was a surprise.  It is on the one hand a modern city, trying to compete with every other international capital in its commercialism but it is also a monument to beauty and sumptuous splendour that leaves the visitor in no doubt why the Russian Revolution occurred. 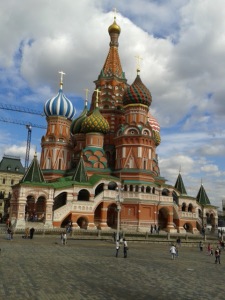 In Red Square, familiar from the old Soviet displays of military might there were preparations for an Edinburgh Military Tattoo style entertainment with posters of jolly Scotsmen hung around the seating area – the Russians admire the soldiers in their kilts apparently!  Opposite the Kremlin and Lenin’s tomb is the major department store GUM. Once a major trading centre commissioned by Catherine the Great the store has seen many incarnations.  After Stalin’s wife committed suicide in 1932 it was used briefly to display her body. When it reopened as a department store in the 1950s, it was one of the few places where consumer goods could be bought and was the scene of queues stretching all around Red Square as the deprived Muscovites waited in line for necessities. Today it is host to stores like Cartier, Gucci and Prada to name but a few.

Nothing is more beautiful than the gold onion domes of the many churches and cathedrals glinting in the afternoon sunshine.  The Kremlin Palace, gilded and brilliant stands within the red walls but overlooks the Moscow River so that the people could see what wealth and excess was available to those in power. 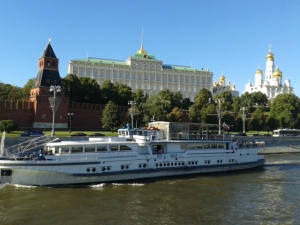 It is a bit of a cliché that the Americans like to show they have everything bigger and better than the rest of the world.  Surely it is the Russians though that boast this with their buildings and monuments.

Within the walls of the Kremlin is the largest cannon in the world. The story goes that the gun was never fired in anger due to the difficulty of loading the enormous cannon balls! 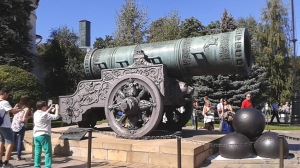 There is an awe inspiring monument in the river, dedicated to Peter the Great. Again myths surround this gigantic structure. Some Muscovites will tell you that it was originally commissioned by the Americans as a tribute to Christopher Columbus but for some reason they decided they didn’t want it and the Russians cut off its head and inserted Peter the Great’s head in its place. 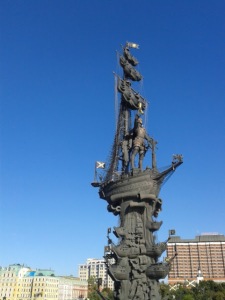 Our journey took us to St. Petersburg, a long cherished destination on my wish list.  Having coped with some very backward facilities – some of the public toilets are no more than holes in the ground still – we were pleasantly surprised by the Sapsan, bullet train.  It is as luxurious as travelling by air in club class and quiet and efficient. The constant announcements became a little annoying as each one in English was prefaced with ‘Dear Passenger’ and we couldn’t contain our astonishment at the warning, ‘Dear Passenger – the tracks on which trains run are dangerous places and we would urge you not to let your children play on the railway lines!’ 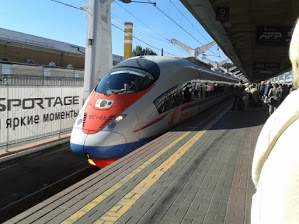 St. Petersburg was everything I had hoped for and more. The sheer number of palaces was dizzying.  It seemed everyone with wealth lived in a palace and some of them were just stunning.  In Moscow and St. Petersburg there are museums and theatres almost on every corner and even though Stalin sold off a lot of the art after the war, the galleries still have many treasures.  Michaelangeo, Leonardo, Rembrandt, Renoir, Manet, Monet, Degas…the list is endless.  You could spend months going round the various palaces and galleries and still never see half of it.

Of course, the most famous palace in St. Petersburg is the Winter Palace housing the Hermitage museum.  It is a beautiful building but I couldn’t help remembering the awful events of the Bloody Sunday massacre in 1905 as I stood waiting to go in. A crowd of demonstrators was fired on by soldiers of the Imperial Guard as they marched towards the Winter Palace, hoping to present Tsar Nicholas with a petition. The end result, after the troops began firing, was that thousands of unarmed women, children and their menfolk were cut down. It is an enduring tale of shame and an event that was a catalyst in the Revolution of 1917. 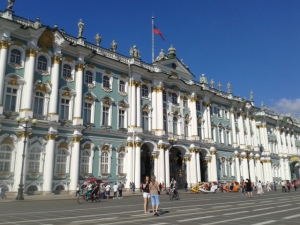 Dreadful tales of deprivation sit alongside demonstrations of what is frankly, vulgar ostentation.  By my fourth or fifth room I never wanted to see gilding again.

However, having seen Catherine the Great’s coronation dress and the outrageous carriages used by the various royal families, there was a sense that your average Russian peasant must have looked on these people as gods and only utter desperation would have made them rebel in the way they did.

St. Petersburg, like Moscow, is a city devoted to culture.  They even have a square called Arts Square which houses only museums, theatres and galleries.

Whilst much of my sightseeing was done with a group, I did venture out on my own a few times and my journey to the Yusopov Palace gives an example of the way some things don’t quite work very well yet. I was planning on taking a taxi to the palace, the site of Gregory Rasputin’s assassination, after a wonderful boat trip through the canals and along the River Neva. After climbing off the boat I stood looking for a passing taxi – I was told you just stood and waited and one would eventually arrive.  One didn’t.  Our Russian guide, Vera, took pity on me and stood for some time with her arm in the air waiting for a passing cab.  Still nothing turned up.  Eventually, a man, whom I had been aware of standing by the waterside watching us, approached Vera and said something in Russian to her.  The next thing I knew she was bundling me into his car – an unmarked black Mercedes and he whisked me off to, as far as I was concerned, a life as a white slave!  He did stop at the Yusopov Palace fortunately but I was amazed at the trust Vera put in him, having warned us of the very shady characters still to be found, trying to get money off unsuspecting tourists. 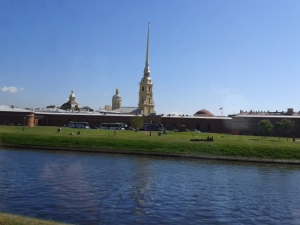 Peter and Paul Fortress from the Neva

On my final day, I rushed out to the Peter and Paul Fortress on an island in the middle of the Neva.  This contains the Cathedral where all the Romanovs are buried, including Tsar Nicholas, his wife and children.

As I was in a hurry, my transfer to the airport would be only a few hours away, I ordered a taxi from the hotel – my previous experience of finding taxis leaving me jaded.  The driver arrived promptly and though he had little English, offered, through hand signals and phoning his English-speaking boss and passing the phone to me, to pick me up again.  When we arrived the driver slipped the security guard a back-hander for letting him onto the island in the car (I was told I would have to walk across the wooden bridge, no cars were allowed on the island!). The driver then refused to take money for driving me there and pointed to his watch, signalling he would be back in one hour.  I then visited the Cathedral of Saints Peter and Paul to see the tombs of Catherine the Great, Peter the Great and of course, Tsar Nicholas II and his family, shot and beaten by the Bolsheviks in 1918. It was, of course, a moving experience.  I would have been more moved if I hadn’t been knocked over in the rush by several tour groups and their leaders waving a selection of pandas, roses, flags and umbrellas in the air.  I left, wondering whether my driver would turn up, comforted by the thought that he hadn’t yet had my roubles.  Sure enough, he was waiting at our pre-arranged spot, eating a Big Mac and waving at me.  He charged me exactly what we had agreed.  I was amazed. 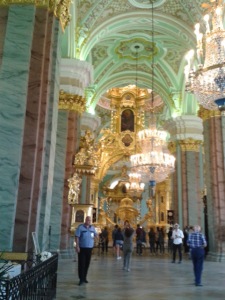 Interior of the Cathedral of Saints Peter and Paul

Barely time to catch my transfer back to the airport, I took one last look at the this amazing, beautiful, corrupt and confusing city.  Like Moscow it lives in two worlds and is struggling to catch up with the commercialised cities of its old enemies while clinging to its glorious, over the top, outrageous past. 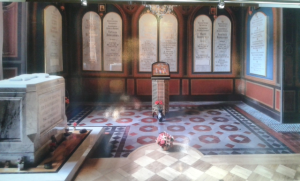 Burial place of Tsar Nicholas II and his family